It has been 5 days since my last post I think, so I apologise for the delay. But it’s been bloody hectic here.
The trees from Spain arrived amid a lot of initial excitement. The driver called to say he was in our lane but could not find the property. I gave him directions to our driveway and waited in anticipation. However as soon as the truck turned up my heart sank. There was no tail lift on the truck and immediately I thought, how are we going to get the pallets off the back. And then just to confirm my fears, the driver asked me if I had a fork lift truck. Unbelievable!
Apparently in their wisdom, TNT assumed as the address was Shades Farm, that I was a farmer living on a farm and therefore would have a fork lift truck about the place!
Or even a tractor would do.WHAT! I said to the driver that the neighbours house is ‘Seafarers Cottage’ but if your looking for the beach it’s about three and a half hours drive due West as the crow flies. I think he appreciated my humour……..not!
A quick call by the driver to headquarters, and I had the assurance that the trees would be delivered on Monday as all the truck’s with tail lifts were booked. As it was Thursday, I was not leaving the trees another three days before getting them. So another chat with the depot took place and they said the trees would be delivered later that day as the driver would go back to the depot and move my pallets onto a truck with a tail lift and a pallet truck. So, off he continued with his delivery’s, and my trees still on board.
As evening arrived and no trees had been delivered I was on the phone chasing my delivery, which no one seemed to know anything about at the depot. However after one of my calm, deep and meaningful conversations with the guy in charge, I was promised the trees would be delivered at 10.00pm that night.
At 10.30pm the phone went, and yes you guessed it. “This is TNT here, I can’t find your property.”
Well eventually the truck pulled up outside and I set to work unloading the pallets and checking on the trees in the torrential rain.
Next morning I was up at 6.00am unloading the pallets and taking the trees into the studio to check them over.
Here’s some of the trees in the studio. Notice the unfinished Scots Pine in the middle of the floor. All the trees had arrived in perfect condition and I could breath a sigh of relief. I spent most of Friday unwrapping the trees and taking photo’s for the website.

Here are a few of the trees. First an Olive 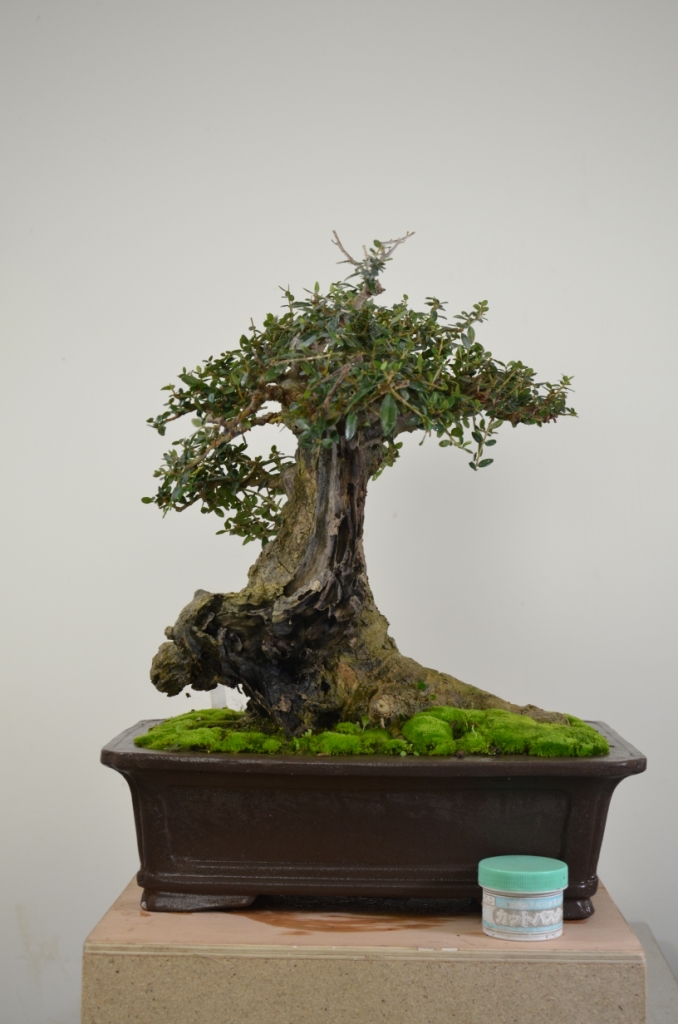 Then a nice Oak. 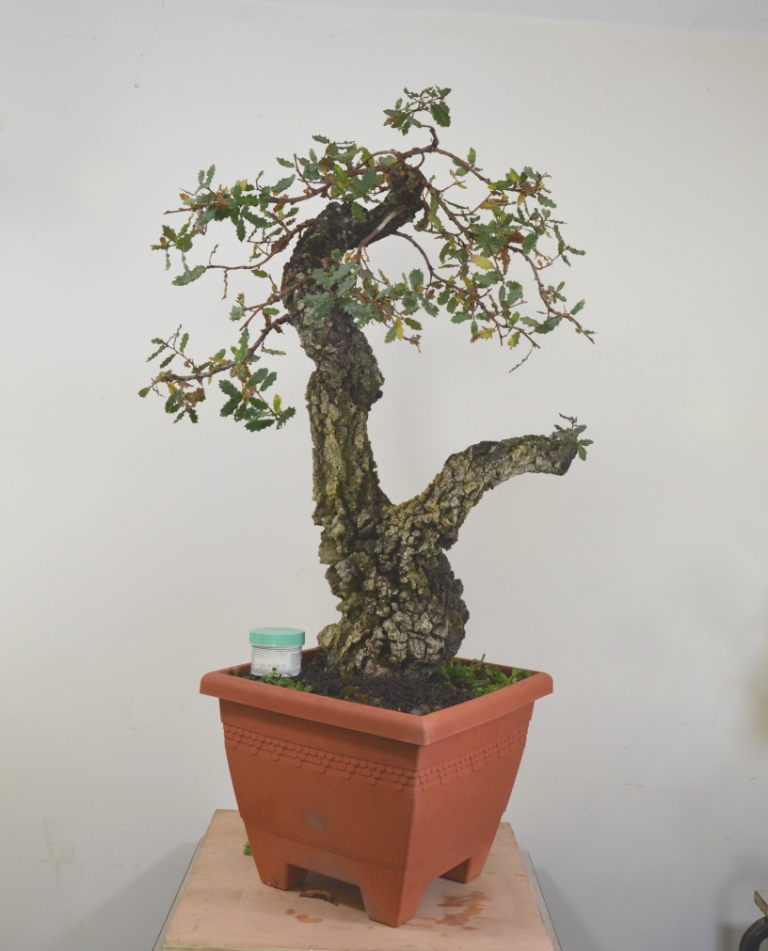 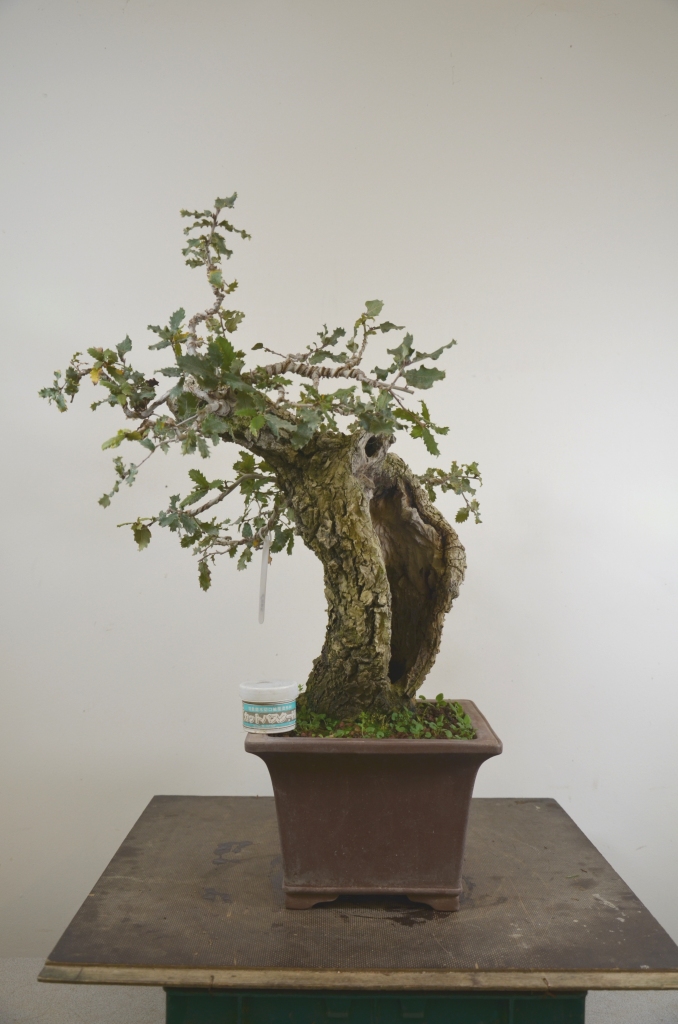 Saturday was chaos as people arrived throughout the day to pick up their reserved trees. With several clients buying two trees once they had seen them in the flesh.
I would like to thank all of you who took me at my word and reserved trees from the images I provided and from my descriptions and reassurances. Thank’s for showing faith!
Late Saturday afternoon we got another shock as Mo Fagan turned up out of the blue. For those of you who know Mo, you can understand seeing Mo would be a shock for anybody. Just joking Mo……….NOT!
Anyway, it was really great seeing Mo who had driven all the way up from Bristol on speck to see the oaks. He said as the oaks were Quercus faginea or as he saw it Quercus fagin, he just had to have one. And he did too, taking home a really nice twin trunk with a massive nebari. So Fagan left with a Fagin. All I need now are some Juniperus evans, Carpinus williams, Pinus smith and some Fagus jones and they should sell like hot cakes. I was really pleased for Mo as he went home a happy chappy and I am sure the tree will have a good future.
By Sunday I was shattered. But there were still several people popping in to look at trees. Marcus Watts popped in on the morning. He was on his way back to Cornwall after making a delivery near Birmingham. He also left a happy bunny taking with him a nice Itoigawa Juniper. By the way Marcus is the UK representative at the European final of the NEW TALENT competition which will be held in France Easter weekend 2013. Good luck Marcus.
Well Monday was my wedding anniversary so in order to keep the day free I decided on Sunday that I better get the Scots Pine finished. Oh did I mention it was 11.30pm Sunday evening when I had the idea. So at close to midnight I went over to the studio and set my sights on finishing the initial styling of the Scots Pine. At 2.45 am and after lots of Earl Grey tea, I finished the Scots Pine and went to bed content.
In case you forgot, here is the tree. 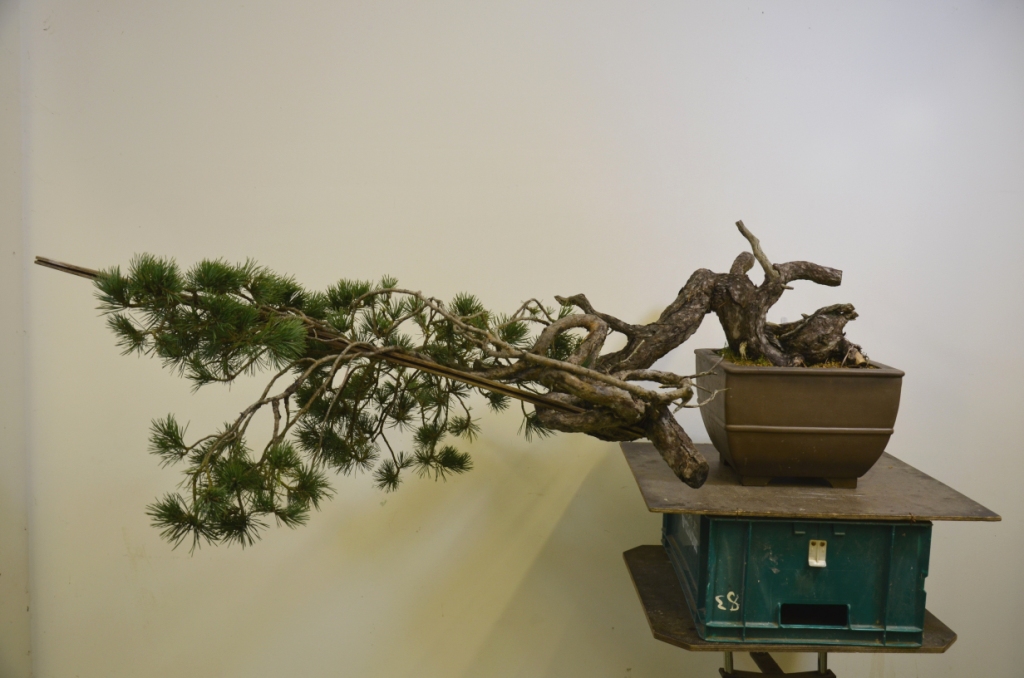 And after the first styling. 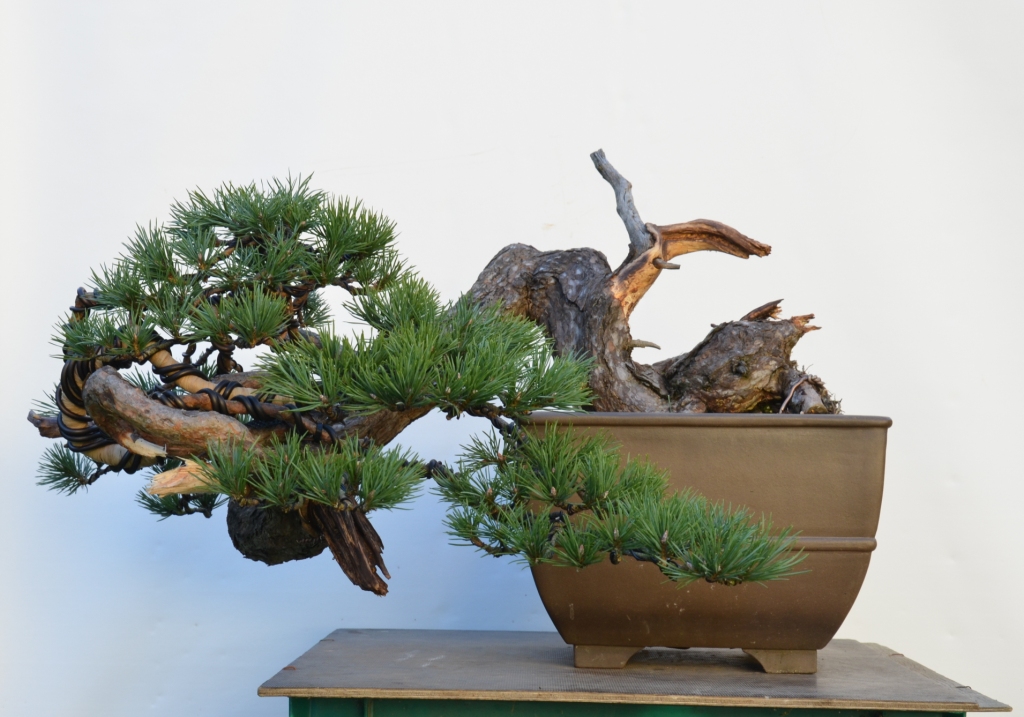 Sorry about the photo, but I was tired.
This first image is OK but next time I wire it I need to compact the foliage on the lower right branch more to the left and possibly shorten the pad as well by about two inches. But for now it’s OK, Rome wasn’t built in a day.
Another one in the bag!