Since my last post I have been really busy. The highlights of the past few days however has been the  Stourbridge Bonsai Renshukai “Stourbridge Bonsai Practise Group” show held on Sunday 11th November and my trip to Spain looking at yamadori.
The Stourbridge group is what is left of a once quite large and active bonsai club. Originally it was the Stourbridge Bonsai Society. Then after infighting and a big split, it became the Beechwood Bonsai group. Then a few years ago, for whatever reasons, several members just gave up leaving literally a handful of members. However it has recently had an injection of a few serious new members who are now getting the group back on track with the help of the current Chairman Dave Jackson.
As most of the members are close friends and or students of mine, I offered to give them my time and do a demo at their show free of charge. I styled a genetic dwarf Spruce Picea abies on the day and a raffle was held to raise some funds for the group with the tree as the prize.
Here are the guys setting up. 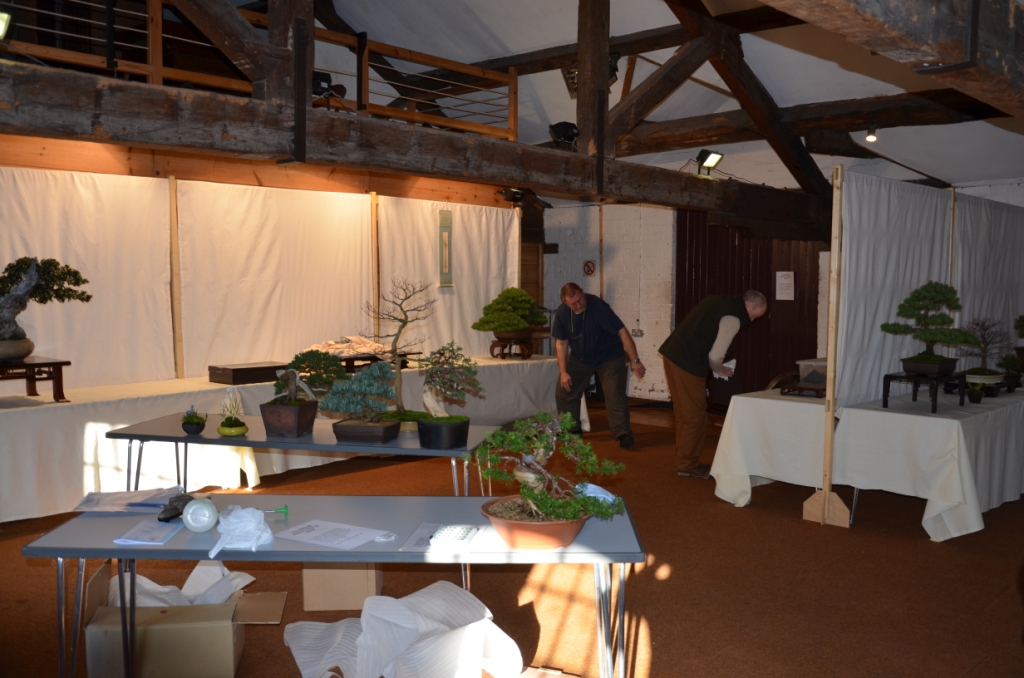 Several of the trees on display were seen previously at the Ginkgo and Noelanders exhibitions in Belgium. Hopefully some of the other members will be inspired by the show and I am very hopeful that the group will go from strength to strength and I will support them where ever I can.

Here are two of the members preparing my Spruce for the demo by removing all the inner dead branches for me while I checked on the exhibition. I must say a big thank you to Jeremy Haddleton who tirelessly and selflessly worked to make sure the event went well. Even to the point of carrying my gear in and out and parking my car so that I could concentrate on displaying the trees. And in the image below (guy left) helping prep my tree. And to Richard Swatman and Kevin Homer for giving up part of their day to help with a bit of wiring, and expertly done too. But then they have a good teacher, what did you expect. 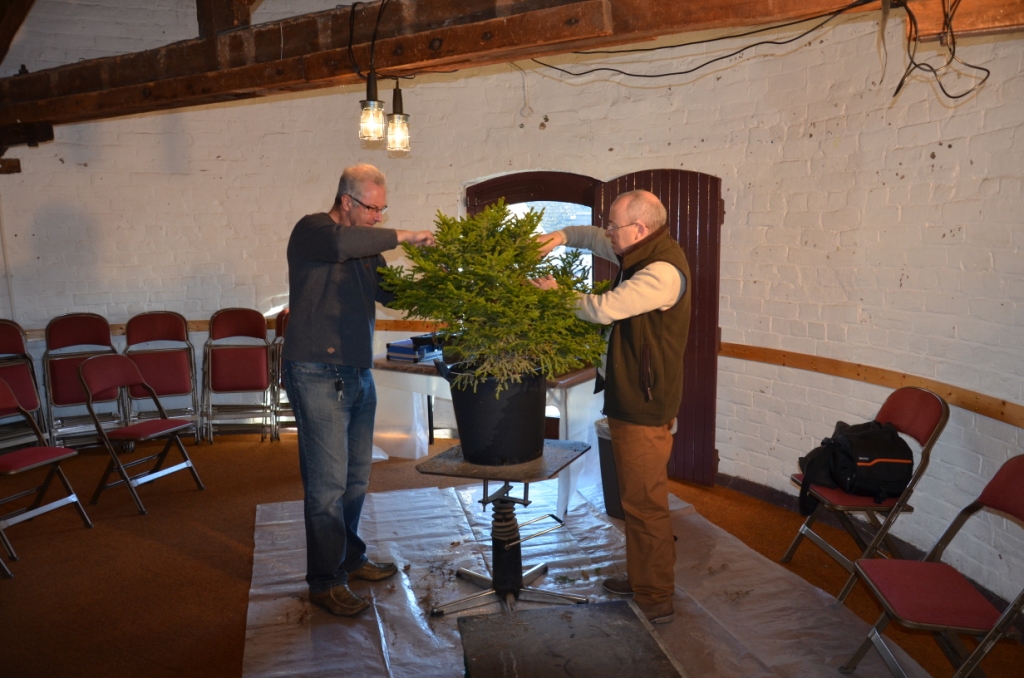 I think for future exhibitions the guys either have to do something about the lighting or find a different venue, but then I am sure they realise that. There is already quality and depth in numbers of good trees which should ensure an even better display next year. In fact four of the members could put on a great exhibition just by themselves with proper preparation.

Well after the Stourbridge event, it was straight home, pack a bag, something to eat and then an early night as I had to be up at 2.30 am to drive to the airport for my trip over to Spain.
The reason for my trip this time was to visit some guys who collect yamadori with a view to securing new material for 2013. Well it could not have gone any better and in fact the first trees should be here next week.
Driving from the airport to look at the first selection of material, I was astounded at how beautiful the granite mountains were and my mind went off on a tangent thinking of how they resembled suiseki, but big ones at that. As we drove past one particular out crop of granite, I thought, I would not like to make the daiza for that! I regret not stopping to take photo’s as it would have been a great reference for the future plus a fun exercise to put them into daiza using PHOTOSHOP or something similar.

In between the friendly chat about bonsai in general and yamadori collecting I could not help thinking that I hoped this trip would be worth it. As well as my trees from Japan, I get yamadori trees from all over Europe and in the past I have had my fingers burnt by unscrupulous collectors. I feel another name and shame idea coming on.
So it is no surprise that I felt a little apprehensive. But once we arrived at the first address, all negative thoughts drained from my mind as soon as I saw the first trees.
One of the topics on the agenda was growing conditions and weather. It was interesting to hear that when we were experiencing some of the wettest and most prolonged bouts of rain during the summer. Over there they were experiencing  heat of 40c and having to water 4-5 times a day to stop the trees frying. So we are not the only ones experiencing freak weather, but of course these extremes can manifest themselves in different ways. When we experienced the winter of 2010 (we had minus 20c here for two weeks) and then the three months of rain this summer. I console myself by thinking about the tsunami in Japan or the hurricanes that devastated parts of the US and this puts things into perspective. We really get off lightly, although sometimes the trees don’t.

This is the first batch of trees that greeted me as I walked into the garden. These are Portuguese Oaks Quercus faginea. This is a great alternative to the Cork Bark Oak Quercus suber, as it will tolerate cold down to minus 20c. In fact these trees have gone below that. I can’t wait for them to arrive now. Although the bark is not as extreme as suber, they still show wonderful old bark texture as you can see. 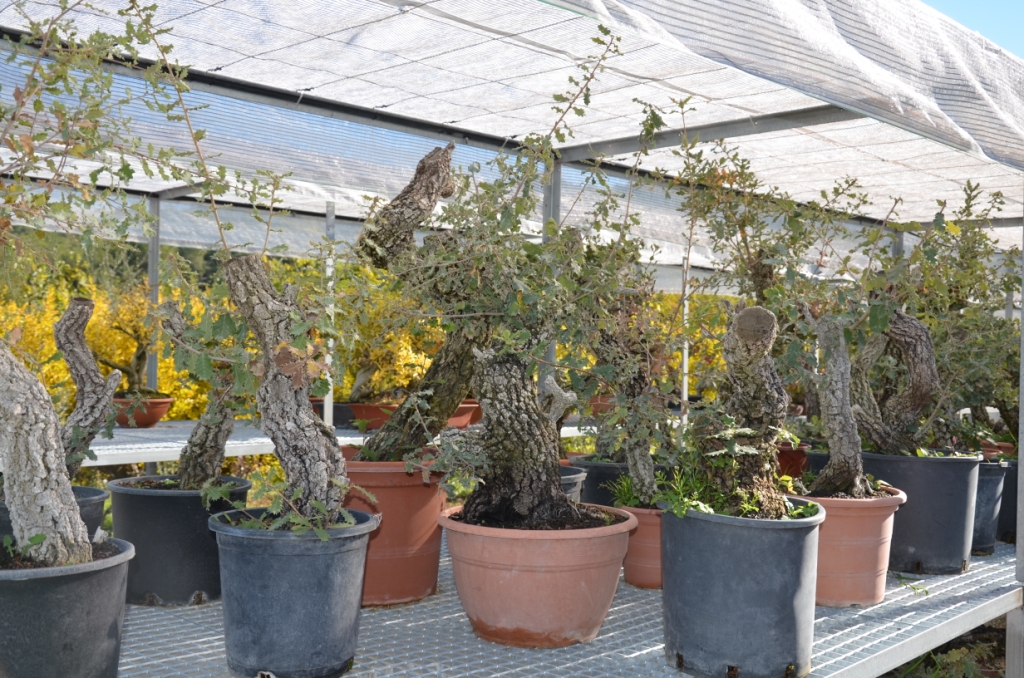 Here’s another example. I am quite sure that these will be a favourite among UK bonsai growers who love deciduous trees. 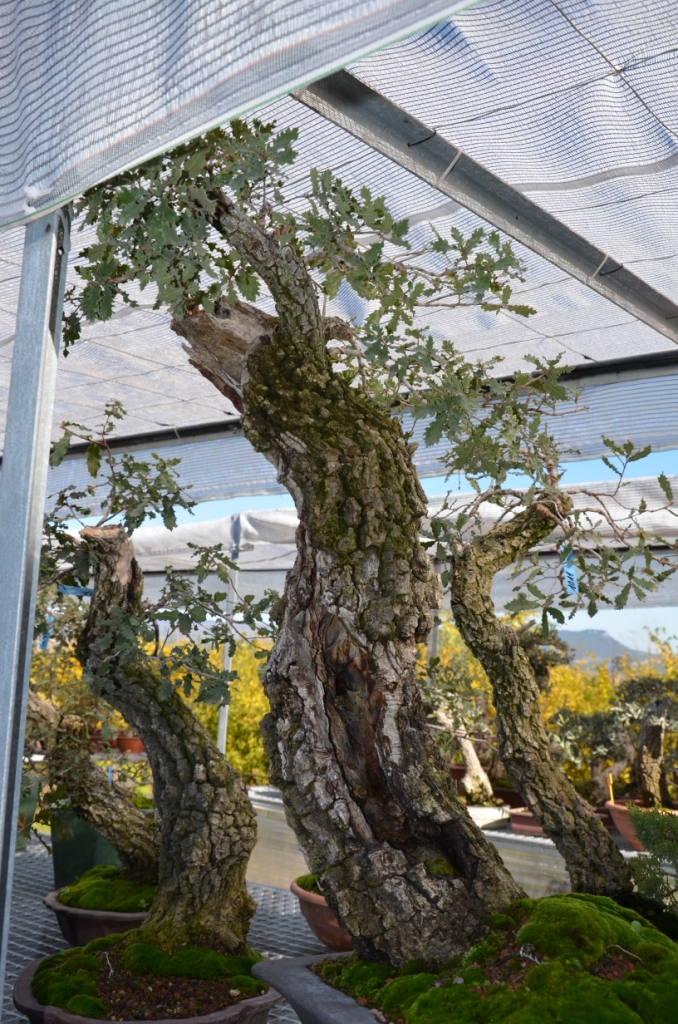 Here is a close up of the bark quality. 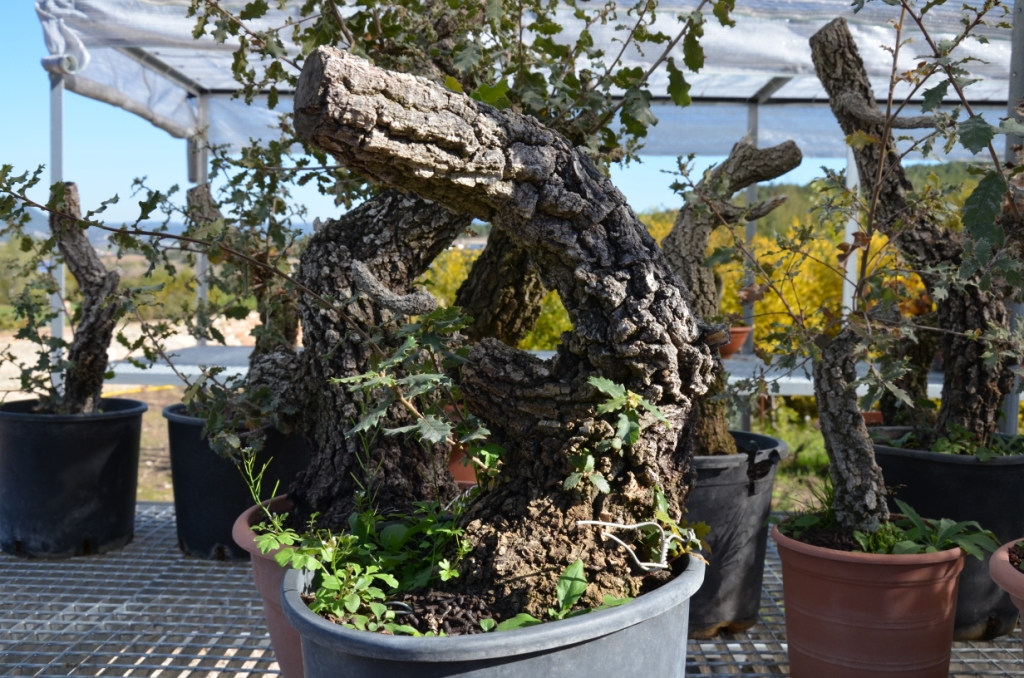 Of course being into conifers, I homed in on the junipers and pines. It was nice to see a few Juniperus phoenicea as well as the ever popular Sabina Junipers Juniperus sabina being collected. They are both very different. The Phoenicea tolerates salt water and so is found closer to the sea even growing on sea cliffs. It is characterised by having ridiculously hard wood as it is very slow growing. The natural deadwood areas are as hard as stone. They are sought after for their spectacular deadwood but not for their foliage which is quite coarse when collected. But over time the foliage can be reduced in size and made more compact, however in today’s race to get the next tree on the bench rather than learn how to work with the foliage, many graft Itoigawa on to it to capitalise on the deadwood and get that quick fix. The branches are very stiff to move, even ones only a centimetre in thickness show great resistance to bending. So any serious bending requires sensitivity and experience.

Here’s a Phoenicea to show the foliage. This one had plenty of deadwood but not much in the way of movement. 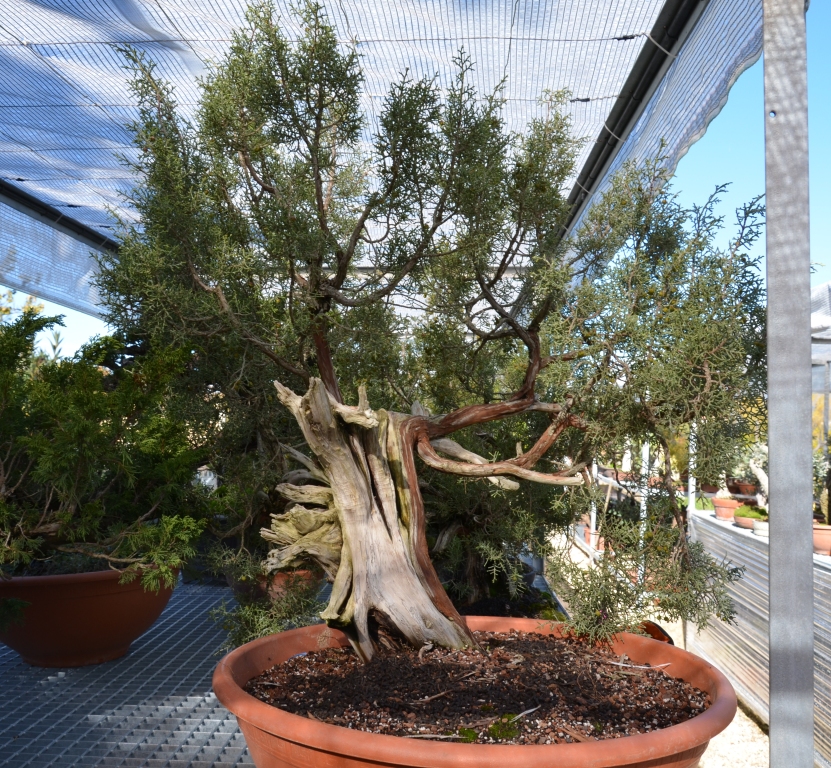 All of the Sabina Junipers I looked at had some movement. Many were spectacular with fabulous deadwood and superb movement to rival anything you would see in Japan.
One of the interesting things for me was to see the variation in foliage on the Sabina’s. Some looked like Shimpaku, some would have passed for Itoigawa. Some of the softer open types looked like Juniperus thurifera. I think the best Sabina’s are the nearest thing we have in Europe to Itoigawa.
The wood of Sabina Junipers is not as hard as the wood of the Phoenicea, or indeed the Juniperus chinensis. So care is needed to preserve this deadwood.

Here are a few examples of some of the Sabina’s. And these are not the best!! 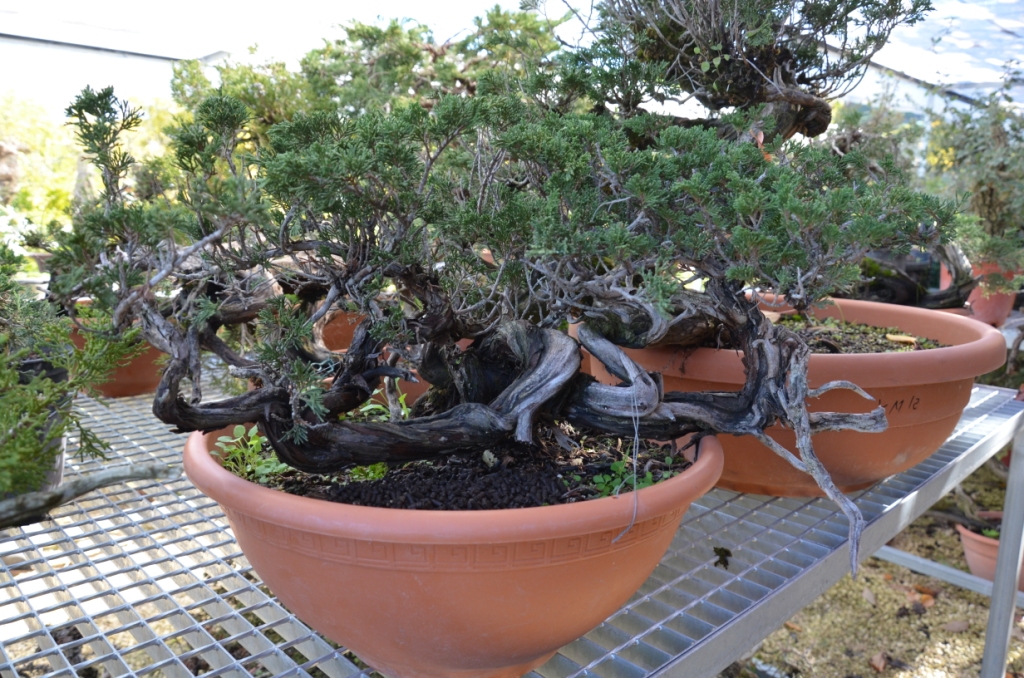 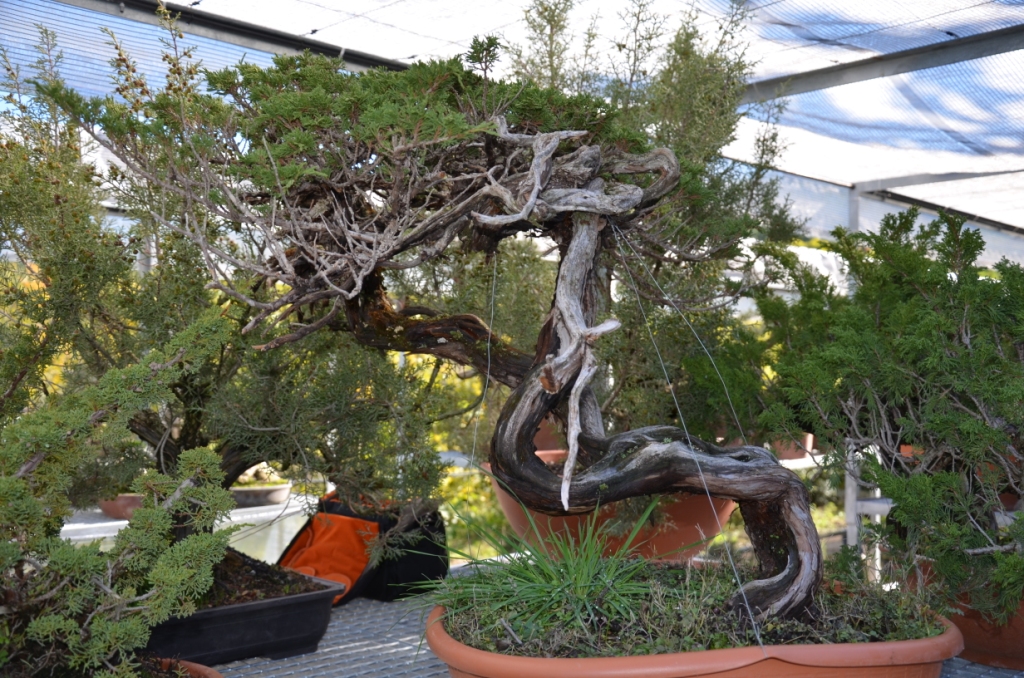 And here’s one showing interesting movement. 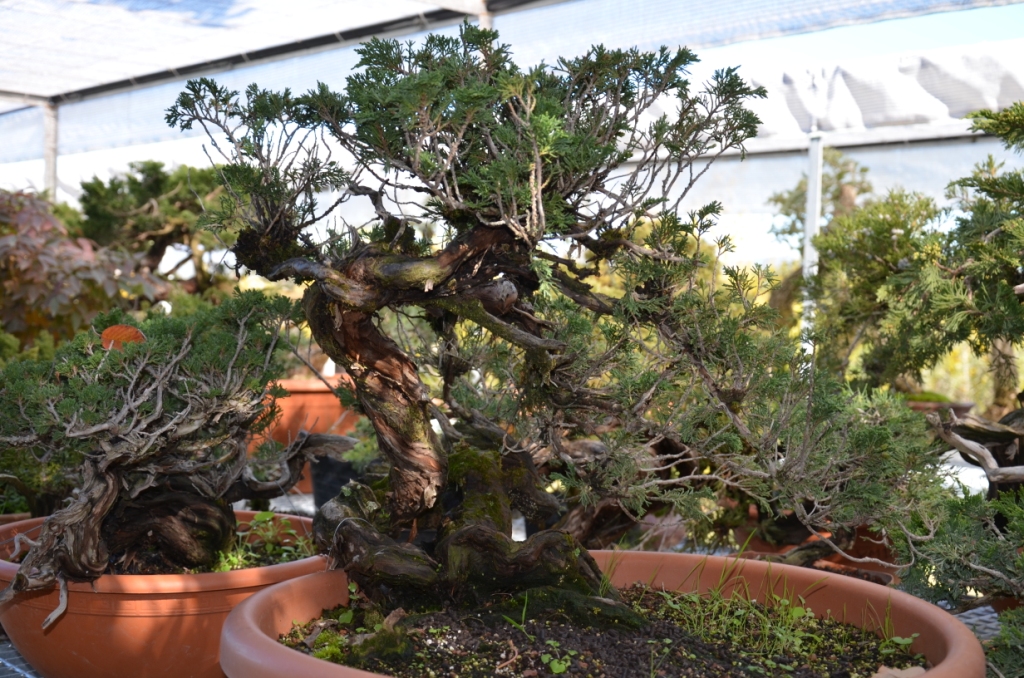 These unique trunk forms are an artists dream. These junipers will make master pieces in time when in the right hands. I have reserved some Kifu and Chuhin sized junipers and a few larger ones and over the next few years I am only going to style yamadori trees for myself. I have a few Japanese trees that I am developing that no one has seen yet. But all my new projects will be European yamadori. Watch this space.
So for those of you who are all junipered out, you will be pleased to know I also went to another place to see olives. When I went over to Angel Mota’s in Majorca to work on his trees, he described the Olive as the king of trees. I can still remember him placing his Ginkgo winner on the ground and sitting on the top to show me how strong they are. I must confess to being fond of Olives. They are a dream to work with. You can cut all the branches off leaving only a trunk and start all over again if you wish. The best ones have fabulous natural deadwood and for a non coniferous tree, they can have very interesting trunks and movement
.
Here are a few examples. 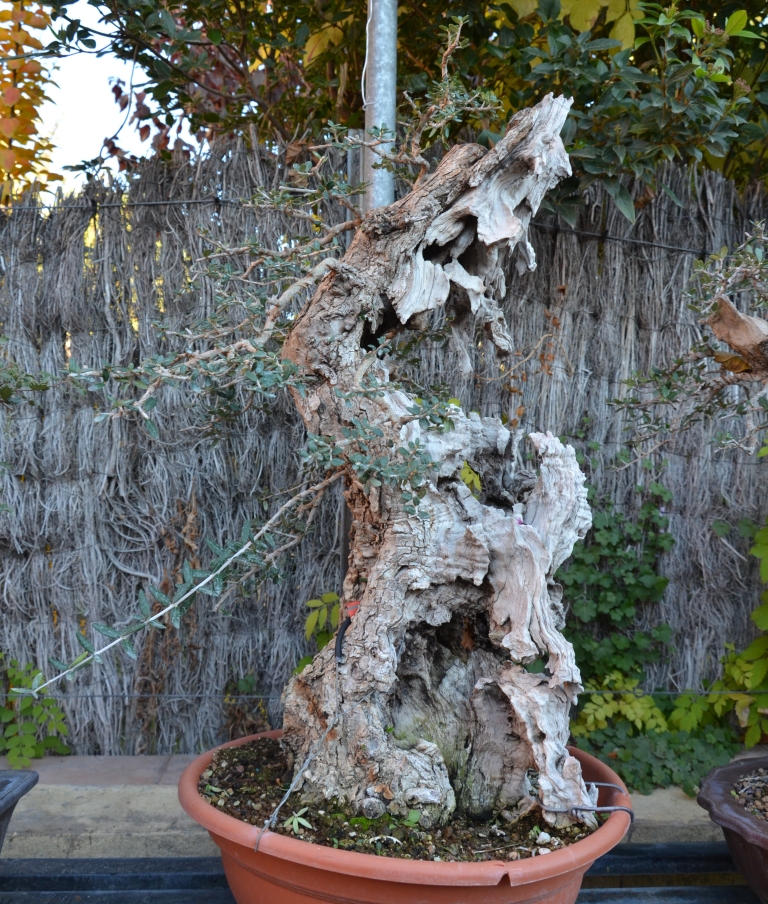 Here’s a close up of some deadwood. 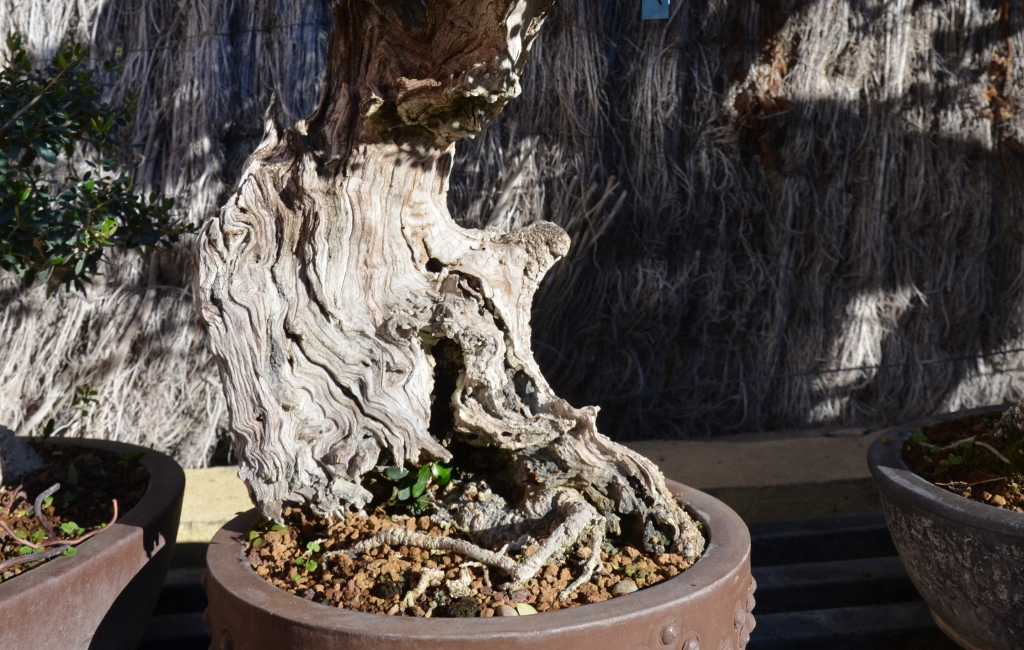 Finally here is a close up showing how small the leaves can be reduced to with the correct technique. Quite incredible. 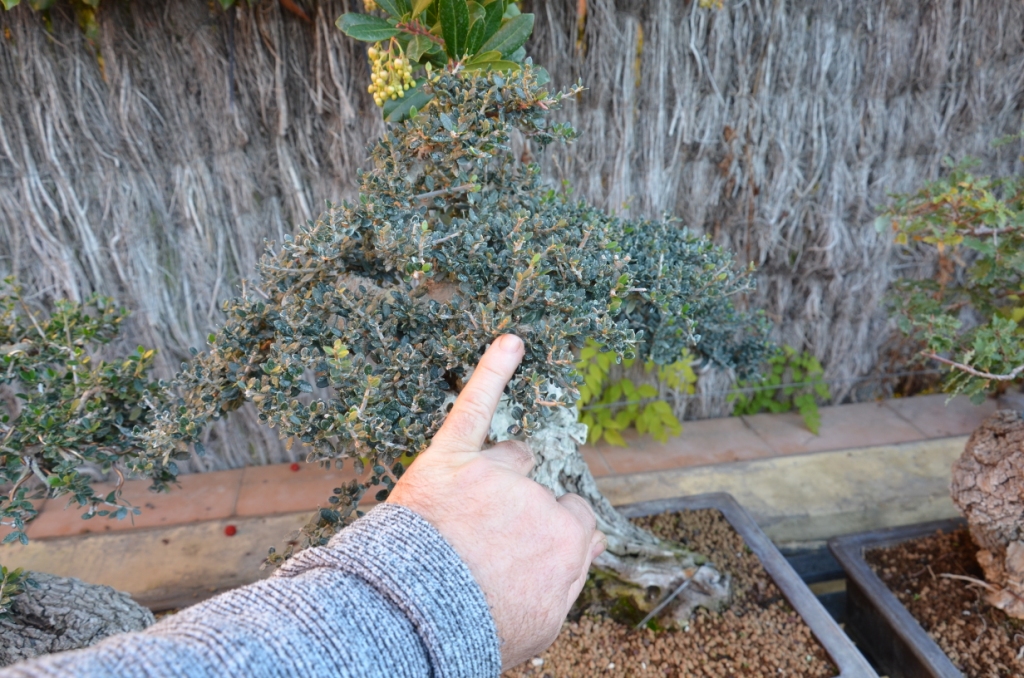 Olives now feature heavily in European bonsai and rightly so. I think that as more people grow them in the UK and people realise how versatile they are, we will see more and more featuring at the top UK exhibitions. I feel it is important that we grow species from our own country and Europe as well as the classic species of Japanese bonsai. And as I travel around the world teaching and demonstrating, I try to encourage people to work with their native species. I really think this is important.
New Products
Latest News