04/12/2012
It was really crisp again first thing this morning. Defrosted the windscreen on the Tollster mobile at 6.15am then off to the gym. It is always great to be in the centre of Kidderminster so early when the place is so quiet. It was like a scene from the film “28 Days later” or “Dawn of the Dead” this morning. No people, no traffic, no sound.
Only the chatter of hundreds of Pied Wagtails roosting on Debenhams roof, waiting for the rays of the sun to warm them up, told me I was not an extra in an apocalyptic film. Came out the gym at 9.00am and as I walked across the car park to the Tollster mobile, a Raven ‘kronked’ from overhead. Yes Ravens in the centre of the town. What a beautiful morning!
Back home, I was straight out with the dogs for their first proper walk of the day. The sun was out, and although it’s weak rays did not feel particularly warm, just the fact that the sun was out made me feel warm. The bottom meadow which is still under water from the swollen brook was covered in Mallards all calling their heads off, no doubt invigorated by the sun just as I was. Walking on the margins of the flooded field were two Muntjac deer. It is not easy to see Muntjac, they are a secretive little deer about the size of a Labrador. To see two out walking together on the white frost covered grass with the sun illuminating their beautiful red coats was something else. What a beautiful morning!
The day flew by with several people popping in. I could not get started on the Scots I have ear marked for styling. Dave Cheshire and Mike Saddler from Ambion BS came late morning. It was their first time here and as always it is entertaining for me to see how people respond on their first visit.
Mike had brought along his huge garden juniper for advice on and hopefully I sent him away with lots to think about after my critique.

School night was a full house, and it was great to have Peter Harrison make the trip over as we had not seen him for months due to commitments. He also left with a smile on his face and a nice yamadori Spruce in his car. If your reading this; Great to see you again mate. My thoughts are with you.

Some images from the evening.
This is Phil Holroyd (right) working on his newly acquired Sabina Juniper. This was one of the new trees from Spain. Established 3 years and ready to go. Originally assumed to be a twin trunk, it is in fact two separate trees in one pot. I really slipped up with that sale.
Click on the image to see a close up of Rod (left) working on his larch. The facial expression say’s it all. But the question is, is it grim determination, intense concentration or simply constipation? 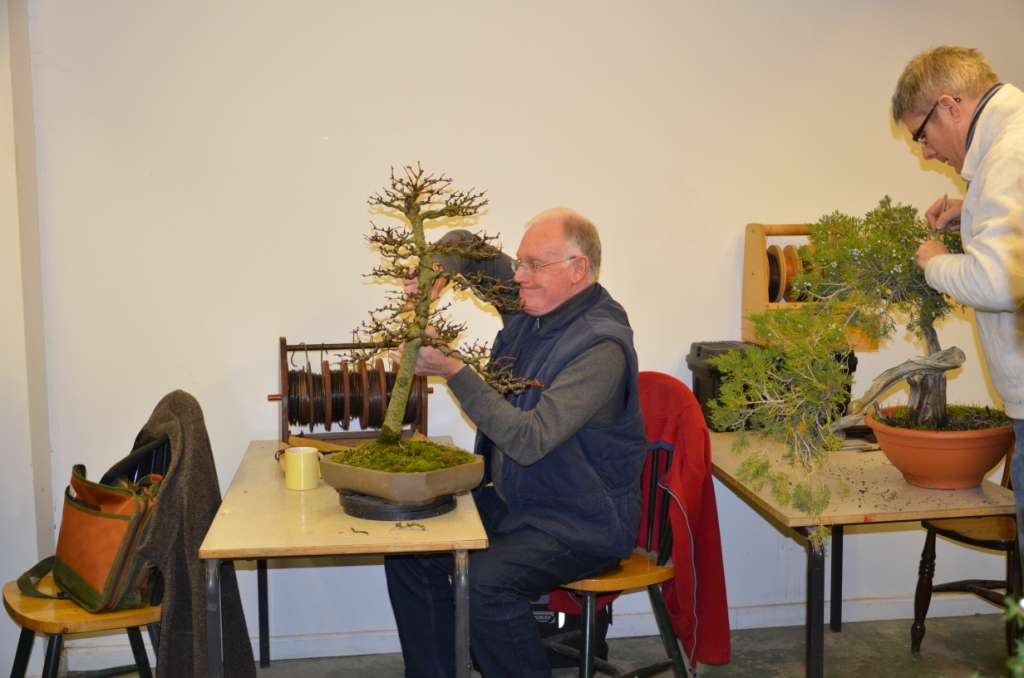 Some more of the guys. 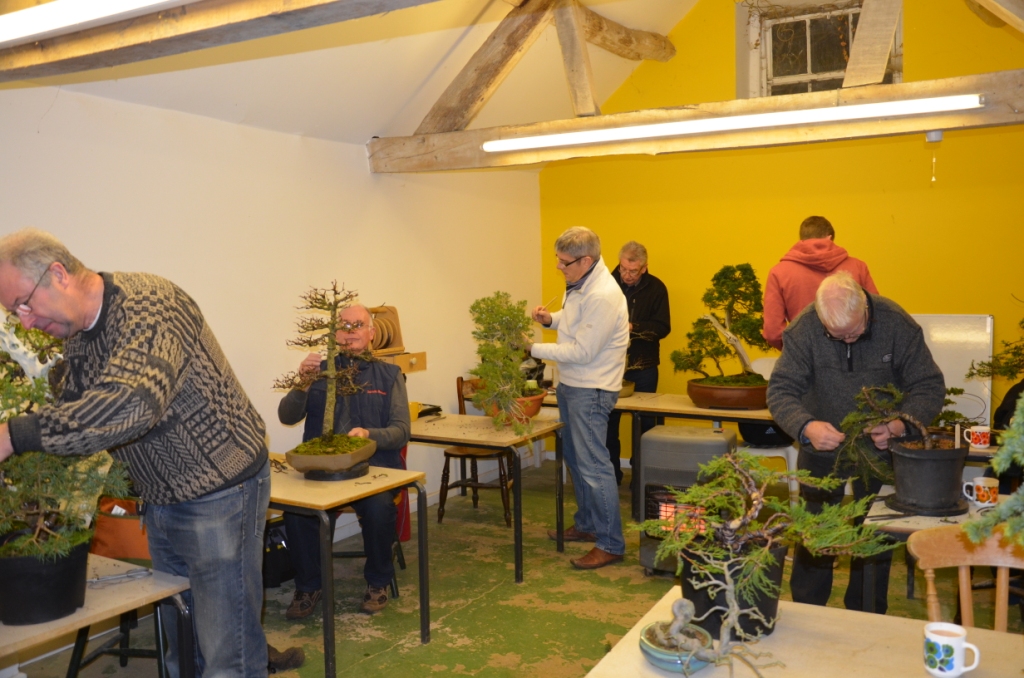 Just in this small room shot, there are ten different tree species being worked on.
Sorry about all the cups in the right of the picture but the guys needed their coffee as it was a cold night, bless!